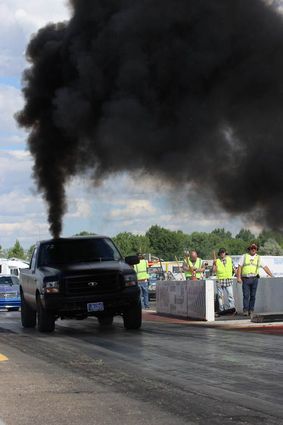 No it's not a monster or a tornado... That's Larry Lloyd's truck properly named "The Punisher." The ford F-350 clears a quarter mile in under 8 seconds.

The Hi-Line Dragstrip saw it's first action of the season last Saturday, as many local and not so local racers brought everything from rat-rods to family sedans to the Phillips County Motorsports Dragraces.

The winners of the races were chosen by how accurately the owner can guess how they would finish.

Winner of the alcohol class was Jeff Nelson, who set a new course record in elapsed time, with 4.20 seconds in the 1/8 mile. Nelson from Wolf Point posted a top speed of 165 mph. Nelson was the winner of the CCR/PCMS Nationals Competition, Sponsored by Custom Collision Repair of Havre and Phillips County Motor Sports.

Amongst the class winners was the Sportsman Class Bobbie Jo Wilkins of Havre, who took her Circa 91 Ford Mustang, down the 1/8 mile track at 80.06 mph. She cleared the length of the track at approximately 8.35 seconds, including a .0691 reaction time. Her dialed in time was 8.27.

Before his run, Davis when asked about his dial in time, he replied, "I don't know yet (because) it's brand new and faster than the one (I raced) last year. I'm hoping probably in the 8's."

To the average driver, Davis' use of a brand new car raises ears to find out why he would use such a machine. Joe only had one answer, the same as anyone who races, "It's about the adrenaline rush."

His previous car was a 2007 Pontiac Grand Prix, which he raced every year.

One real spectacle to see was Larry Lloyd and his 1999 Ford F-350, 1 Ton pickup. This vehicle was painted all black and nicknamed "The Punisher." Which if you know the comic anti-hero, you'd know this truck may be in his garage.

I just painted it flat black and started a theme, Lloyd told the PCN. "It is still a diesel pick-up. A lot of times I tow my dad's car here.

During the time trials Lloyd turned heads with his "tow-truck" posting times of 7.8 seconds, clearly not a typical speed for a pickup.

That wasn't all, during his second trial, he unleashed a cloud similar to the black smoke monster on the cult show Lost, something that had to be seen to be believed.

That equates to 11.9 in the quarter (mile), Larry Lloyd said.

According to Lloyd, the vehicle is 6800 pounds total. He races it in 4 wheel drive, allowing him to leave the starting line hard.

Lloyd who has been racing for a few years is part of a whole family of racers that includes his father, the older Larry Lloyd, his brother, and his nephews and nieces.

"Me, my dad and my brother are all in different classes," Lloyd said. "That way we don't have to compete against each other."

Lloyd didn't get his 7.6 time, however he provided entertainment and intrigue to those who watched.

Winner of the No Box Pro class was Stacey Klungland of Havre MT who dialed in at 7.08 and crossed at 7.59.

Glasgow's Kyle Stahl was winner of the Junior Dragster races, after posting a time of 8.96, his dial in was 8.90. His vehicle reached 69 mph.

Canadian star Nitro Mike was also at the track to entertain all who attended. Though the races were threatened by rain, which delayed the show, his performance was spectacular, going down the track in his modified Chrysler PT Cruiser.

Mike is the record holder for the longest Wheel-stand (wheelie) by a car, and he went longer than an eighth of a mile at the Hi-Line Dragstrip. He went off the track a few hundred feet to add special effects like sparks, that were seen when his back plates struck the rocks.