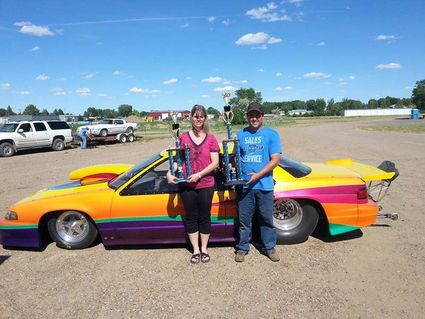 Ann and husband Neil Stahl both won awards at the Hi-Line Dragstrip last Sunday. Ann won the No Box (Pro class) and Neil won the Box (Super-Pro class). The couple stands in front of Neil's dragster.

Seventy-two racers took the line on a fair weathered and mosquito-less weekend at the Hi-Line Dragstrip, which started Saturday and ended Sunday.

Havre's Josh Viall was on fire, sweeping the event for the Sportsman Class.

Sunday's runner up in the Sportsman class was another citizen of Havre, Holly Haas, who dialed in at 8.08. Saturday's was Bobbie Jo Wilkins.

Malta's Marty Lundstrom is racing in the Pro class this year. He has been racing at the track for the last seven years.

"I loved racing and I went to work for Milk River Co-op a bunch of guys owned a car (72 Mercury Comet GT)," said Lundstrom, owner of Milk River Co-op. I bought into the car and just bought this pickup to run myself these last couple of years."

The 1972 Comet is typically ran by his son, Jared Stenberg, though he wasn't able to attend last weekend's races.

Lundstom ran his 74 Chevy short box in the Pro Class.

Though his truck is an automatic, like many cars Lundstrom opted for the auto-shift option, which gives him more control during gear changes.

"It steals horse-power if it shifts for itself," said Lundstrom, who has set up his machine for maximum horsepower by adding a racing shift handle.

Lundstrom has never won a race at the track, however Lundstrom looks at the brighter side of it.

"It's all fun," said Lundstrom. "Hopefully, someday I will win but right now it's just for fun."

According to Lundstrom, he and his blue pickup had been doing well in the time trials and clocking in at around 7.58 and 7.61.

"It's pretty good but if I can keep consistent, that's the name of the game," said Lundstrom.

Like many racers Lundstrom opted to go for the faster speeds he's hit in the time trials.

Others like Saskatchewan's David Knittel always aims for just a little faster.

"I want to go faster," he said later in the interview.

He is in his fifth year of racing in general. He and his wife Tracy also race at Swift Current.

"Her vehicle is also white and an older version of mine, but the same thing. A full-blown, full-tube chassis truck," David said. "Hers is pretty, mine goes fast."

The couple makes the two-and-a-half hour trip from Sask., for every PCMS racing event. They also race in Swift Current.

"That's about it right now," David said. "But we're hoping to get NHRA sanctioned and race the NHRA circuit a little bit too."

Though David and Tracy do hope for more racing venues in the near future, they call the Hi-Line Dragstrip home.

"This is our track," he said. This is where we race and this takes priority and everything else is just for fun."

He continued, saying racing as a whole is fun and that's why they do it.

The only time David has won a race was in 2011 at Swift Current in the pro class. He is in his first year in the Super-Pro class.

The Knittels are not the only couples racing together each event at the dragstrip. In fact, Glasgow's Neil and Ann Stahl, also husband and wife, both took home trophies on Sunday.

Neil hit his mark in the Super Pro class after dialing in a time of 5.77. He hit a top speed of 119.14, highest amongst the winner's circle.

Runner up for the Super pro on Sunday was Malta's Rick Starkey, who dialed in at 5.98 and had an elapsed time of 6.03.

Starkey was also the runner up on Saturday, when he dialed in a time of 6.03 and finished at 6.18. 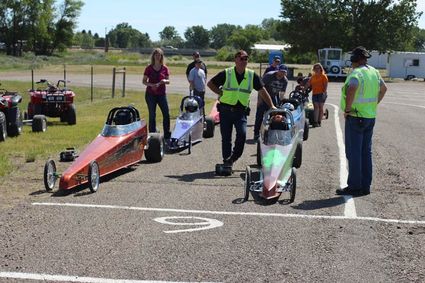 The Junior Dragsters line-up, patiently waiting their turn to take the track. These cars are built for speed, reaching nearly 70 miles per hour on a 1/8 mile track.

The winner of the Saturday Super Pro was Swift Current's Graham Smith, who had a dial in of 4.96 and finished with a time of 4.977.

Cordel Salsbery of Bismark, ND, won Saturday's Junior Dragster class after hitting his 10.94 mark. Glasgow's Blake Lloyd was the runner up, with a time of 10.04, after dialing in a 10.15 goal.

Riley Lander of Sidney, MT won Sunday's Junior Dragster class after dialing in a 8.85 and finishing at 9 seconds flat.