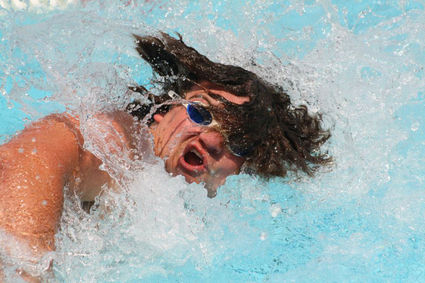 Cole Brown swimming in a freestyle event at the Lewistown Meet last week, He was fourth in the Men 15-19 100 meter freestyle with a time of 1:21.01.

Messerly, who was sick for last week's meet bounced back hard, claiming two top finishes and a third place finish.

His third place finish was in the 50 meter freestyle, an event in which he posted a time of 32.30 in the final round.

Amestoy seems to be hitting her stride at just the right time, as she put up her biggest numbers of the year so far. She won the Women 15-19 50 meter freestyle with a time of 29.84.

Shay Garfield also had a great showing at the meet bringing in 30.5 points.

Marcus Woods was another swimmer who left his mark, bringing Malta 30 points.

"We had a really good showing in Lewistown this last weekend," said Coach Lynn. "We all swam well."

He didn't know what to expect of his team this week, due to the fact the team has been training hard.

"We had mixed results," he told the PCN. "Some of them swam faster. Some of them drove slower."

With divisionals kicking off this weekend, Coach Lynn, hopes the training and practices have paid off.

"We're trying to prepare them for divisionals and state," he said. "The Lewistown meet wasn't as important as the divisional meet is."

He went on to say that the plan for this week has been to work the team hard until today, and eventually take some reps off in order for the swimmers to recover in time for Saturday's divisional meet in Chinook.

"This Saturday's prelims are the most important of the year," Lynn told the PCN.

The top twelve in every event will make it to state.

"The important thing to do with that first swim on Saturday is to get a good time and qualify for state," Lynn said.

Divisionals will start this Saturday and Sunday at 10 a.m.

The state meet will kick off Saturday August 2 in Conrad.