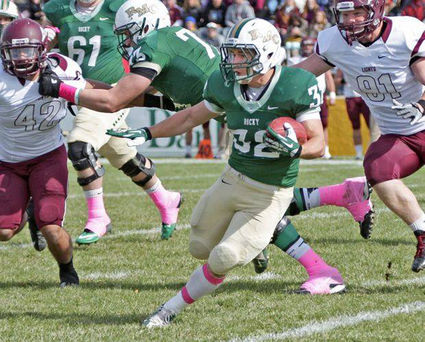 Rocky Mountain College running back Jade Olson was a standout at Malta High as a Mustang. Today Olson is at RMC trying to retain his status as the team's starting tailback.

The 2012 Malta High graduate was a part of a backfield that utilized three different halfbacks during games in a pass heavy offense.

As the team's starting tailback, Olson managed to lead the Battlin' Bears in rushing yards with 454. He also reeled in a few catches, equaling 269 yards receiving. He had five rushing touchdowns and three receiving.

Though the backfield rotation isn't certain for the Bears, Olson hopes to retain his starting position, with the potential for more repetitions, due to the fact that the school lost two seniors running backs to graduation.

"I think we lost a junior also, so we gotta figure it out at camp." Olson said.

He went on to explain that the team is a pass heavy team and that limits some of the touches Olson gets.

" Our QB will read a linebacker and depending on what they do, he will hand the ball off or pull it and throw it to a receiver," he said. "There's a lot of plays where you think you will get the ball but don't get the ball."

He admitted that is a frustrating part of the game. That's understandable considering Olson was a key cog in Scott King's run heavy offense in Malta a few seasons ago.

There is also the potentially major setback of not getting to play a part of this season due to breaking a bone in his wrist while doing power cleans.

"I gotta wait and get an MRI this week," he said. "I might have to get surgery or they say it might just be a sprain."

If he does need surgery for a seemingly unimportant bone, he may end up missing the season.

Though he is facing adversity Olson hopes to go even further this year setting a goal of at least 500 on the way to 1,000 yards this season. He also hopes to add 10 more touchdowns to his resume.

Not knowing if his place as a starter is in his future, Olson admitted the first thing he needs to do is retain his status as "starter" on the depth chart.

As far as the team goes, Olson knows that the team goal is to win the Frontier Conference.

"We haven't done that in a really long time," he said.

Olson, standing at 5'6" and around 190 pounds, has been training hard in the offseason, living in Billings to train with the team.

"That's why I live here (in Billings) now, so I can be here for football, because that says a lot to the coaches if