Mustangs Football: Malta slays the Wolves in the second half

With playoffs on the line, Malta must repeat recent history against Wolf Point 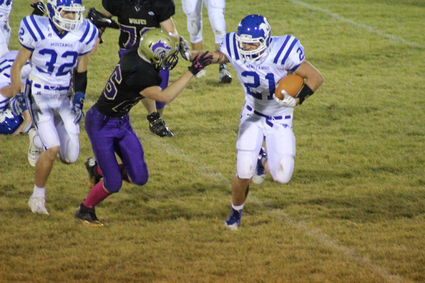 Quintan Boos has been making would-be tacklers pay all year. Here he is delivering a stiff arm to a Cut Bank defender in last week's 32-15 victory in Cut Bank. He racked up 148 yards and two touchdowns on 20 carries.

Tonight Malta will take on the Wolf Point Wolves at Mustang Field, with hopes of making the playoffs. If they don't win, they won't get in.

"We need to defeat our next two opponents to get into the playoffs," said Mustang Head Coach Nick Oxarart. "We control our own destiny, that's the famous cliché."

The Mustangs will have their hands tied, with the Wolves running a spread offense, loaded with talent.

The team runs their spread out of Wing and Shotgun sets.

"They're wanting to spread it out a little bit and distribute the ball both passing and running," Coach Oxarart said." "They'll run...