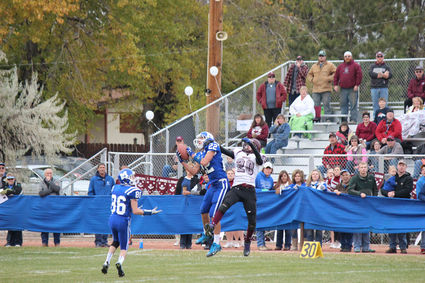 Tyson Carney made plenty of highlight plays on offense and defense. He was the only Mustang to earn All-Conference honors for offense, defense and special teams this season. In the picture he outplays Roundup's Cody Pearson for the ball and earned an interception in the opening round of the 2B playoffs.

The Malta Mustangs football team put together a pretty good season, going 6-4 and winning a game in the opening round of the 2014 State B Playoffs.

In order to have a winning season, not only do you need to perform well as a team, you need playmakers.

While Malta is full of playmakers, a few of them, seven to be exact, received All-Conference honors.

Senior Quintan Boos, was one of two athletes to receive All State Honors and was a first-team all-conference selection on offense and second-team selection on defense. He was a first team offensive and defensive selection in 2013 also.