Blissful at the Pavilion 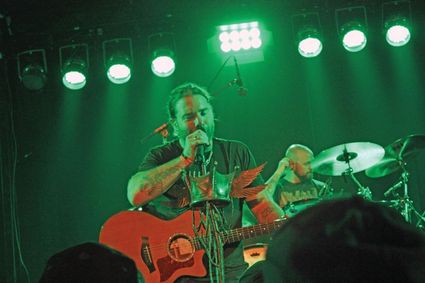 “We pulled in and didn’t know what to expect,” Royal Bliss front man Neal Middleton told the PCN. “We got here and it was a rodeo arena, but this was awesome and everybody has treated us like family as soon as we got on stage. We drove 700 miles to get here this afternoon and it as well worth it. Great venue, great crowd…it was a great night. “

The doors for Saturday night’s show at the Milk River Pavilion, hosted by Malta’s Greg Smith of Remote Entertainment, opened at 7 p.m. and concert-goers were met with the smell of burgers grilling on Darla Niebur’s barbeque while the Malta Shriners provided cold beer and mixed drinks all night. The opening act on the night, Mabel’s Rage, took the stage shortly after 8 p.m. and Malta sisters Sara and Laura Gouker were excited for the show to start.

“We are expecting an awesome show,” Sara, celebrating her 34th birthday, said before the music started. “I have been listening to Royal Bliss for the last three months on YouTube and I have become a huge fan.”

“They are a great band,” Laura added. “This is the first time I have been in the Pavilion, but it seems like a great place for a concert and I know this will be a great night.”

At about a quarter to nine, Middleton and the rest of Royal Bliss took the stage at the Pavilion and a couple songs into their set, let those in the crowd know just how they felt about being in Malta and playing music in a rodeo arena.

“Thank you for bringing us here,” Middleton quizzed. “It’s not every night we get to play at, what is this a Pavilion, rodeo grounds? We don’t usually play in places like this…this is where we belong right here, this is awesome. Thank you for letting us follow our dreams.” 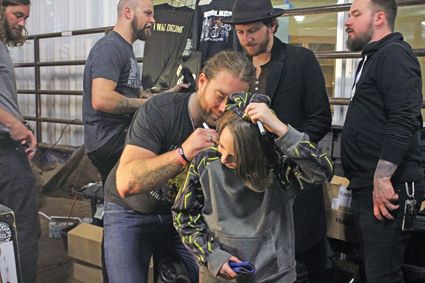 Malta's Dylan Kinney gets his hoody autographed by the members of Royal Bliss after the concert on Saturday night.

“This show was good, I liked everything,” said Dylan Kinney, third grade student at Malta Elementary. “The drummer is my favorite because he is really good.”

“It was a lot of fun for this Granny with no fanny,” agreed Pearl Peacher. “I danced all night.”

The Royal Bliss show was the second concert Smith and Remote Entertainment has brought to Malta in the last 12-months (not including the backyard, acoustic set by Florida rockers Nonpoint he provided for friends and family) and when the lights came up, and the music was over, he was pleased with how things went and thankful for all the help he received.

“It takes a lot of people to pull something like this off,” he said. “Thanks goes out to a lot of people. Both bands were great, so thanks to them, but more importantly, thanks to everyone who showed up tonight because without them, there wouldn’t be any concerts in Malta, Montana.”