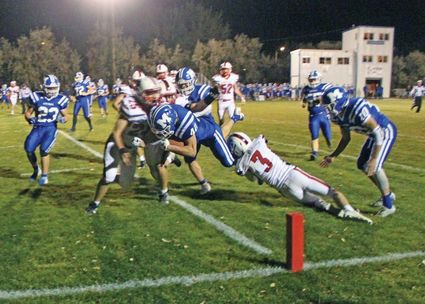 Mustang Tanner Smith dives into the end zone during the fourth quarter of Malta 33-24 win over Glasgow last Friday night in Malta. Smith followed a slew of blockers into the end zone including #23 Cash Salsbery, #44 Andres Lopez, #55 Carter Clausen, and #20 Keigo Kawai, all pictured.

With a 33-24 win last Friday night, the Malta Mustangs will host a playoff game against Huntley Project this Saturday afternoon, but the rival Glasgow Scotties didn’t make it easy for Big Blue during the final regular season home game of the 2018 season.

Captains for the night’s contest were Henry, Schipman, a...