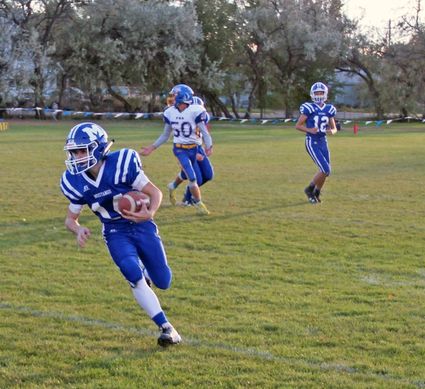 Malta Mustang JV's Darrow Messerly takes a pass from quarterback Conner Tuss during last Monday's afternoon's game against Fergus, the final of the season for the team.

The Malta Junior Varsity Football team took the field for the final time in the 2018 season when they hosted Fergus last week, and though they had several solid offensive drives and dominated the time of possession, the Mustangs fell to the Golden Eagles by a 40-0 tally.

All told, the JV Mustang's quarterback Conner Tuss compiled 89-yards of passing on 14 completions on 30-attempts and 3-interceptions. As a team, the Mustangs gained 134-yards on the ground on 36-carries: Rex Williamson had 60-yards on 9-carries; Ty Murphy 49-yards on 20-carries; Tuss 9-yards on 5-carries, and Shawn Gilkers...