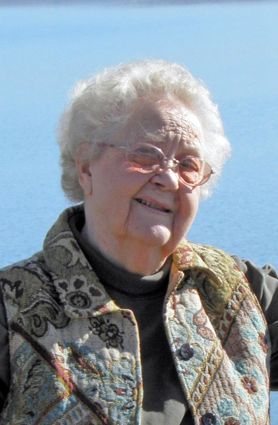 Bessie Mae Waters, at 102 was the last surviving member of her immediate family. She passed away on Sunday, December 23, 2018, with her family and friends at her side. Everyone was with her in spirit. She passed away at the Hi-Line Care Center in Malta, MT. She was born on September 8, 1916, in Pea Ridge, Ark., the daughter of Floyd Richard and Bessie May (Shores) Blevins.

She attended schools in Arkansas, Nebraska, and Montana. The family arrived in Montana in 1927. Upon arriving in Montana, the family settled in the Sun Prairie Community south of Malta. She attended schools in Sun Prairie riding on a horse until the 8th grade, with her brothers on the horse with her. She then went into Malta and lived with several families through her high school years, graduating in 1935. She met William S. "Bill" Waters and they were married on June 29, 1935, in Glasgow, Mont. They welcomed three daughters, Wilma, Beverly, and Sheila. They settled on the family homestead, (his father homesteaded there in 1913) where they farmed with his parents.

She was the family historian and relayed many stories of our ancestors.

Bessie Mae was very active in The Little White Church and had been a member since she was in high school. She was a longtime Sunday School Teacher. She was also a lifetime member of the Order of Eastern Star and was a member of The Daughters of the American Revolution.

After 61 years of marriage, Bill preceded her in death on her 80th birthday. She was very proud of the fact that she was able to remain in her home, maintain the family farm and remain active her whole life through.

She is preceded in death by her husband William S. Waters, her grandson Kirk W. Wilson, her parents and her siblings, Davis Blevins, Gladys Stratton and Homer and John Blevins (twins) as well as many dear friends.

The visitation for Bessie Mae was Thursday, December 27, 2018, at the Kirkwood Funeral Home in Malta. The Funeral service was Friday, December 28, 2018, at the funeral home. Burial followed at the Malta Cemetery. Memorial contributions may be made to The Little White Church or to the Phillips County Historical Society. Condolences for the family may be left at http://www.kirkwoodfuneralhome.com.