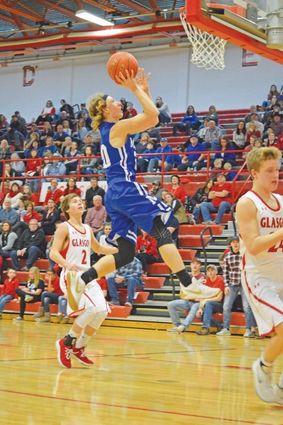 Malta's Kevin Henry goes up for a layup in Malta's win over Glasgow last Friday night.

The Malta Mustangs picked up wins against a pair of Northern B opponents last week, defeating the Glasgow Scotties in Glasgow and then the Shelby Coyotes in Malta.

According to senior Kevin Henry, the win could be attributed to one thing.

"We had a great week of practice," Henry told the PCN. "We came ready to work Monday and practiced hard all week. We came knowing that it was going to be a tough game but we got the win."

In their 54-38 win over Shelby, Malta was led by Kooper Oxarart who scored 15 points. Oxarart accounted for three of Malta's six treys in the win.