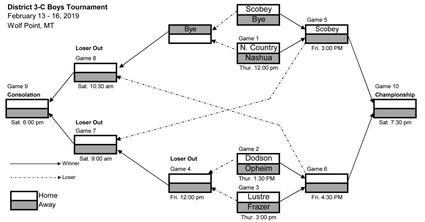 The 2019 District 3C Tournament features a pair of Phillips County teams that could make noise in the Eastern C Divisional if they earn one of three spots this weekend.

With only Scobey receiving a first-round bye, Dodson will open the tournament against Opheim of Thursday at 1:30 p.m. The game will start at the conclusion of North Country's opening round game against Nashua at noon on Thursday.

The Mavericks split their last two games of the season, losing 45-30 to Lustre Christian on Friday, February 8 and then defeating Frazer 51-34 on Saturday, February 9.

In their win over Frazer, the Mavericks were led by Jesse Lee who had 17 points. Loden Idler had 16, and Ty Murphy had 11.

In their loss to Lustre Christian, Murphy led the team with 15 points. John McColly had seven points. Lee had six and Beau Simonson had two.