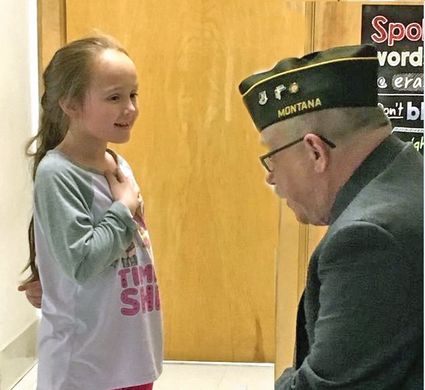 "I pledge allegiance to the flag..." could be heard between the kindergarten rooms of Mrs. April Ost and Mrs. Janine Tuss in Malta Elementary School as the students took time to recite the Pledge of Allegiance to Commander Jim Layton of Buster Deo Post 4067 and Col. Donald Klinko.

Students with intensity, sincerity and pride held their right hand over their heart and proudly declared their affirmation to America even though some were slightly nervous.

Once they had completed the task, they were greeted by Kari Hould, VFW Auxiliary Patriotic Instructor and Michelle Stevens of the American...