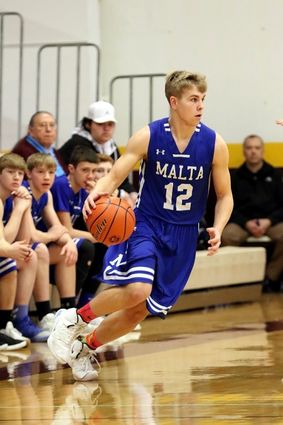 Kooper Oxarart dribbles down the court during the 2019 Northern B Divisional.

The season came to an end for the Malta Mustangs as the team lost out in the consolation round of the 2019 Northern B Divisional in Shelby last weekend.

Malta lost their opening game to the Rocky Boy Northern Stars on Thursday, February 28. The score was 52-39. The Mustangs would face off against the Choteau Bulldogs in the opening round of the elimination bracket on Friday afternoon and fall 80-64.

In their loss to Rocky Boy, Malta was led by junior Tanner Smith, who scored 14 points and had nine rebounds. Sophomore Kooper Oxarart had 10 points and five rebounds.