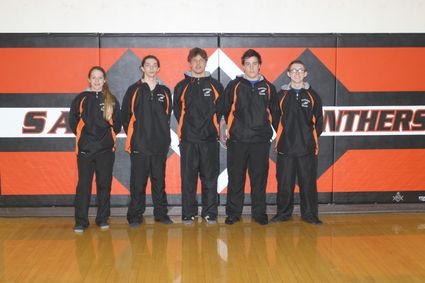 The Saco Panthers track team may not have the numbers that they had last season, but the group has brought back a few athletes that should compete late into the postseason.

Gone are graduated seniors Chandler Pippin, Bailey Funk, Sydney Zeller, Challise Young, and Chris Depuydt. The group was a part of Saco's 11-athlete track team, which was the largest group the school had in over a decade.

Saco will be led by Head Coach Barry Malone, who had coached the team for the last several seasons. Malone will be rejoined by Tanya Funk and Wade Sundby who has had previous experience coaching track at Plentywood High School. Sundby most recently helped coach Paige Harris, who went on to win several events in 2016 including pole vault.

This year's Panthers team consists of one senior, one junior, one sophomore, and two freshmen. Though the team is young this season, they have the potential to make a splash in the postseason.

Unfortunately, Murphy was not able to join the team as they went to the Scottie Invitational last Saturday in Glasgow.

"He has started practicing but he had a little man vs animal accident where he got dumped by a bull and kind of temporarily messed his shoulder up," Coach Malone said. "We are hoping to get him back in a couple of weeks."

The team also welcomes back Josh Salveson who nearly qualified for state in pole vault after clearing a personal best of 10-6 and taking eighth at the 2018 Eastern C Divisional.

"He thrives on vaulting as well," Coach Malone said. "He missed state by one height. He is hoping to move on to that and get back to where he can get one more shot at it."

Salveson also posted season-best in his running events last season, posting a time of 13.62 in the 100-meter dash at the Richey-Lambert Fusion Open and a time of 27.55 in the 200 at the Eastern C Divisional.

"He does the 100, 200, and 400," Coach Malone said. "He really enjoys the long and triple jump. He has really nice form for triple jump but we have got to work on his speed to get him further out into the pit."

Pippin was a part of the team's short relay last season along with Murphy, Salveson, Dustin Ostrom, and Brady Albus.

Jaycee Erickson is the Panther's lone girl this season and she made an impression by placing in two events in this season's opening meet last Saturday in Glasgow.

Erickson set personal bests in all five events she participated in last Saturday, taking second in pole vault by clearing 8-0 and fifth in the 100-meter hurdles. She was seventh in javelin with a mark at 84-3. She had a personal best of 15.33 in the 100, and she left a mark at 12-7 in long jump.

"She is a little spit-fire and she is a very coachable kid," Coach Malone said. "She is fun to have out there because she will give you five events and then she will also want to try others, so we are going to have to find her five solid events that she will enjoy and not spread her so thin."

"I think vaulting has become her favorite event," Coach Malone said. "She got her junior high record of vaulting eight feet and that would've placed in our district and would've been competitive at our divisional last year as well."

Coach also mentioned that Erickson has also become a lot faster and stronger since last year.

Erickson also seems to want to try an event that may run in the family. 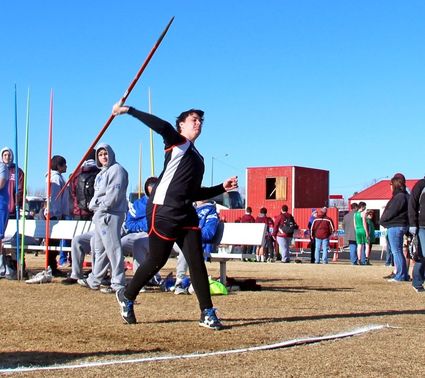 Saco Panther Dylan Brown with his first javelin throw of the season in Glasgow last Saturday.

"Her mom was a javelin thrower in high school and I think she is going to give that a shot," Coach Malone said. "She will also do the 100 and the 100-meter hurdles. She did some hurdles last year and this year she started off well working with Coach (Tanya) Funk on that. She shows a lot of promise in the hurdles."

Freshman Dylan Brown will work primarily as a thrower this season, despite also having experience running in his junior high years. Brown posted a throw of 26-1.5 in shot put, 72-5 in discus, and 76-7 in javelin at the Scottie Qualifier last Saturday.

"We have got to get some strength in his core because there is a big difference between throwing the smaller discus to the high school men's discus," Coach Malone said. "Even going from the four kilogram shot to the 12-pound shot, he is going to be seeing some big changes from junior high to high school weights."