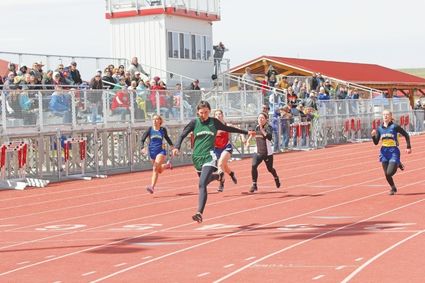 Freshman Hannah Hanley won the 100 and 200 races at the 2019 Eastern C Divisional in Laurel.

Eight Phillips County Class C athletes will be represented at the State C Track and Field meet in Laurel on Thursday, May 23, through Saturday, May 25.

Four out of five Penguins that competed at the Eastern C will be headed to state this week.

"This is a very young group of kids with no senior or junior leadership, they were like seasoned veterans in the way they handled themselves with the nerves," Coach Charlene Wasson said. "They stayed calm and collected in the things that they did and they just really had a focus on getting themselves to state and they did that."

Whitewater freshman Hannah Hanley was the lone divisional champion among Phillips County teams last weekend winning the 100 meter dash, the 200 meter dash and placing in both the 300 hurdles and and 100 hurdles.

Hanley took fourth in the 300 hurdles with a personal best of 50.21. She took sixth in the 100 hurdles with a time of 17.80 a new best, placing at the meet but not qualifying for state. This season, only the top five qualified for state out of the Eastern C.

Whitewater's Kelsee Cummings took second in shot put with a throw of 34-06. Cummings had a throw of 75-11 in discus placing thirteenth in the event.

Saco freshman Jaycee Erickson qualified for state in pole vault by clearing 8-0 and taking third. She just missed out on qualifying in javelin and 100 hurdles, taking eighth place in both events with a throw of 92-06 in javelin and a time of 18.22 (new best) in the 100 hurdles.

Coyote Michael Jaynes took fourth in triple jump leaving a mark at 39-11. He also took seventh in long jump with a leap of 17-09.50.

Dodson sophomore Jeramiah Benson posted a personal best in the 400. His time was 59.47, giving him tenth place in the race.

Dodson Head Coach Tianna Bloomer was thrilled with her team's performance at the Eastern C.

"They did wonderful," Coach Bloomer said. "Tina finally threw over 100 again. Michael learned to fly. And Jera ran his best time ever! Extremely pleased with their performance. Michael was so pumped to place and go to state. He was almost there for long jump. Very close."

Saco Sophomore Chayten Pippin took thirteenth in the 400 with a time of 1:00.26. He also had a distance of 32-11 in triple jump, placing sixteenth in the event.