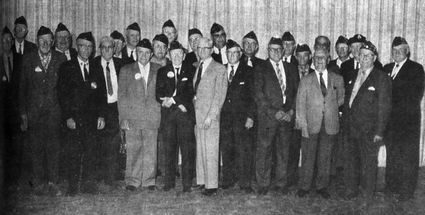 This is the group of World War I veterans who attended the 50th anniversary celebration of the Montana America Legion in Malta last weekend. We were unable to identify them all, but Pete Hoagland helped with most of the names. Starting from the left are three men who are unidentified. Next is Paul Kropp of Choteau, another unknown Legionnaire, Fern Taylor, R. C. Hoynes, both of Malta, George Cowie of Great Falls, Matt Drabbles and Frank LaPlante of Malta, unknown, W. C. Kienenberger of Dodson, George Koechel and Fred Robinson, Malta, Rusty Larcombe of Lakeside, Jack Sullivan, Horace Matthews and N. J. Cummings of Malta, unknown, Harry Austin of Whitewater, Chet Shore of Helena, Ted Didier of Malta is standing behind Shore. The next two gentlemen are unknown followed by Pete Haogland of Malta and W. E. Woods of Saco. PCN 1969.

A possibility of another crop failure facing Phillips County farmers, the Malta Commercial Club and the Farm Bureau were and making a survey of conditions and possible means of aiding drought-stricken farms. The County Commissioners were mapping out a program of road work for employment needs.

Guy Mead was named manager of the County Shipping Association. It was estimated the association had saved members $10 per head of stock shipped.

Long George Francis, who on March 7, 1918, had disappeared from Havre the day he was to be sentenced in Distr...