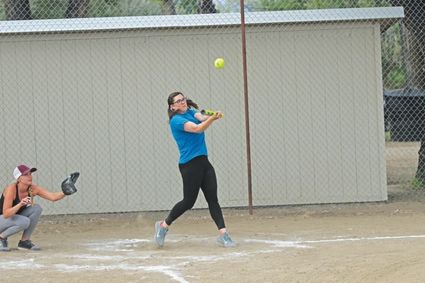 Cassie Pratt launches the ball into center field for a triple.

The first week of the two week double elimination tournament kicked off that day. Given their are four men's teams the opening round was also the semi-final round. Goonsquad and Where My Pitches At? and Goonsquad each punched their ticket to the Championship game on Tuesday, July 2, at 7 p.m., at the west field. Phillips County Insurance (PCI) and Heavy Hitters faced each other in the consolation game at 7 p.m. on the east field. Results will be shown in next week's PCN, as well as th...