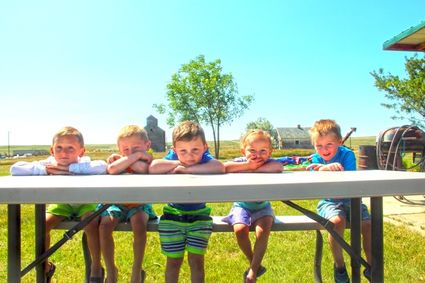 Amus Blunt, Everett Blunt, Kellen Slade, Etta Blunt, and Ev Hellie, take a break from running around in Loring on Sunday for a photo.

Each final Sunday of July each of the last three years, friends and families have gathered in Loring for "Sunday Fun Day" and though the winds whipped across the prairie at last Sunday's Fun Day, when all was said and done, the event once again was deemed a success.

"We had a blast," reported Kyle Wasson after the day. "Waterslides went up in a nice, shaded spot inside a wind-break and a fun time was had by all." 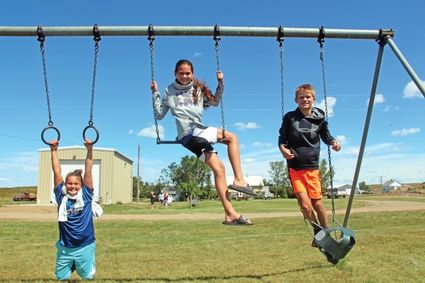 Harper and Haedyn of Huntley Project, and Walker Olson of Billings, (all in Loring visiting their grandparents Gayle and LeRoy Simonson) monkey around in Loring on Sunday.

The waterslides Wasson references were those of Malta’s Salsbery Brothers Water Slides. Cash and Cordel Salbery spent the morning trying to figure out if their traveling inflatable entertainment would be a go as they dealt with the 20+ mile an hour winds and one young man in attendance hoped the brothers would be successful.

"I especially like the bounce house because it is so bouncy," Amus Blunt, age seven, said.

Amus' mother, Whitney, told the PCN that the Fun Day would include Norwegian horseshoes and a pulled pork potluck at the Loring Fire Hall. She added that in year's past, roughly 50 to 60 people had shown for the picnic. Whitney's daughter, three-year-old Etta, then introduced the PCN to Loring's honorary Mayor, Boris, a big, fluffy white dog who barks when he wants to be pet.

"This is Boris, the puppy, and he has sharp claws," Etta said.

Wasson said that when the day was complete, the turnout was wonderful, and all money raised on the day will be donated to help make repairs on the Loring Fire Hall's roof and floor.