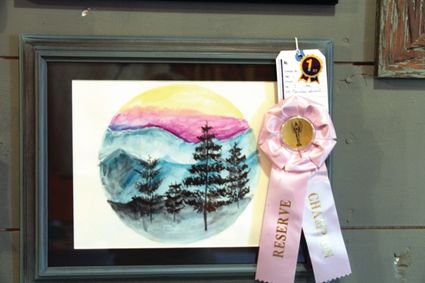 "We are thrilled with numbers of entries this year, again, even though they are down a little," Joy Linn, Phillips County Fair Board, told the PCN on Sunday. "We added some new categories this year and I am happy to say, each new category had entrants. We have been expecting a smaller turn out since the 100th anniversary in 2015 and we sort of saw that this year, but overall it was another great fair.

Of the top five open class exhibitors this year (see the list below) a new name among the ranks was Nolan Moore, age 7 from Malta. Nolan was in Sidney, Mont., with his teammates on the Malta Swim Team for the State Meet, but through the power of social media told the PCN that he hoped to save his winnings from the fair, a total of $114, to save up for a new Xbox.

"I am so happy that he did so well on his projects since it seemed like he was always brainstorming or crafting things so maybe I can get my kitchen table back for a while and not full of craft items," Nolan's mother, Julie, told the PCN. "I really don't mind his 'messes' because he is expanding his creative ability and talent."

Of all his entries at the Phillips County Fair this year, Nolan said he favorites came in the art category, one entitled "Bambi" because "it was just so cute," and another entitled "Olaf" because it was fun, but hard to find arms for (Nolan relayed this message through Julie right before he headed off to compete in the breaststroke.)"

As it has been in past years, Needlework, Art, Hobbies once again saw the most entries this year with a total of 815, nearly 40-percent of the total entries.