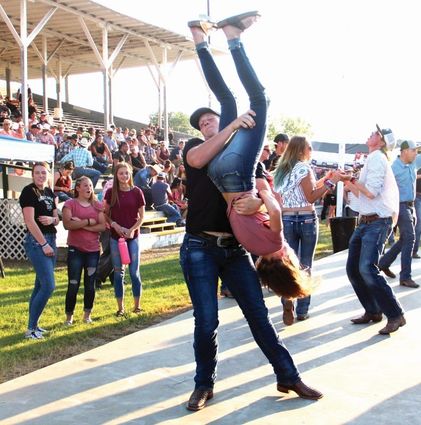 Beau Simonson and Arena Niebur, above, cut a rug, before dazzling with some fancy moves during the Casey Donahew concert on Friday night at the Phillips County Fair.

As the sun started to set on during Friday night at the 104th Phillips County Fair, the grandstands started to fill and the first of two headline acts, the Casey Donahew Band, took to the stage to set the night's concert off right.

"Here is a love song, so if you are in love with someone, stare into their eyes for the next three minutes," Casey Donahew instructed the crowd.

As the night carried on, the second headline act of the night, the Randy Rogers Band, took center stage and sang well into the evening.

Crasco would know. Calling herself a "fangirl" of the band, Crasco's trip to the Fair last Friday marked the ninth time she has seen Randy and the boys in concert, but as luck would have it, it wasn't the first time she'd seen Randy on the day. Earlier, while eating lunch at the Tin Cup Bar and Grill, Crasco spied Rogers at the restaurant and eventually worked up the courage to approach him.

"I had a Coors Light, waited until he was done eating and then went up to him," Crasco said. "I have met some pretty big named people, but never him, so it was pretty awesome."

Even later in the day, still before the concert, Crasco attended the Randy Rogers meet and greet at the fairgrounds, and met the crooner one more time. 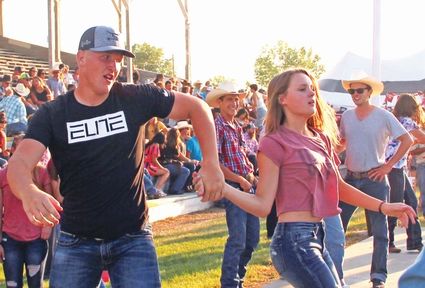 Beau Simonson and Dally Niebur, above, cut a rug, before dazzling with some fancy moves during the Casey Donahew concert on Friday night at the Phillips County Fair.

"He remembered my daughters' names, and we talked about how our daughters are around the same ages," Crasco said.

Callie Hines, former Malta resident who now teaches in Chinook, made the trip home to attend the fair over the weekend, including the Friday night concert.

All told, nearly 900 people attended the night's concert and Phillips County Fair Board member Eric Wilke said he heard nothing but positive comments on the dual-headliner format of the event.

"It seems like more and more fairs are going to the co-headliner concerts and everybody really enjoyed it on Friday night," he said. "I think it is the way to go."