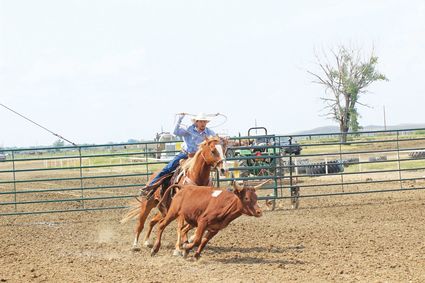 Dakota Gustad rides during the 2018 Ranch rodeo at the Phillips County Fair.

The Phillips County Ranch Rodeo is scheduled for Monday, September 2, at the Trafton Rodeo Arena in Trafton Park after the conclusion of the 50th Annual Milk River Wagon Train.

The event formerly sanctioned by the NILE Rodeo, is under a different entity.

"Our Bronc Riders will also get to go to the finals but we get to take two of them instead of just one with the team," Green said.

Green explained that the categories mimic what ranchers have to do in the field.

"All of these guys are ranchers and cowboys," Green said. "Most of them either own a ranch or are working on a ranch. We have several local teams and several outside teams."

Green confirmed that some of the outside teams include ranchers from Grass Range, Chinook, and Glasgow.

The event is scheduled to start at the conclusion of the Wagon Train. To sign up for the rodeo's waiting list call Green at 301-0149. Entry fees are $500 per team. Bronc Riders have to pay an entry fee of $50. There will be a payout based on the amount of bronc riders.

"The first ten teams to sign up can come," Green said. "If twelve sign up, we have to cut two."