A new, tangled display at the P.C. Museum 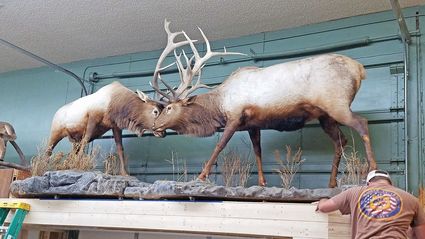 The newest display at the Phillips County Museum was a bit of a trick to get into place.

The massive taxidermy piece pits two bull elks against one another, their antlers locked in battle, just the way they were found in seven years ago in the South Phillips County's Larb Hills by Will Carlson.

"This is a great addition to the museum," said Phillips County Museum Board Chairman David Rummel. "But it was a community effort to get it up there."

The "up there" Rummel refers to is a good 10-feet in the air, where many of the museum's taxidermy pieces already sit, and the two elk tussling do so...