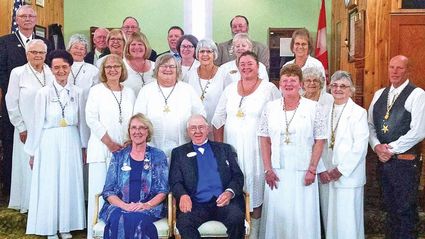 A joint Official Visit of the Order of Eastern Star of Montana was held on Thursday, September 12th. The Malta Sacajawea Chapter #37 and Hinsdale Riverview Chapter #80 were hosts to Elaine Robinson of Superior, Mont. Worthy Grand Matron of the Grand Chapter of the OES in Montana, accompanied by Worthy Grand Patron Earl Bricker of Moore, Mont.

The evening started with a soup supper and fellowship at 5:30 p.m. and the meeting was at 7 pm. Sacajawea Worthy Matron Jenny Oxarart and Riverview Worthy Matron Jodi Barnard presided over the meeting and Grand honors and hearty hand claps were offered...