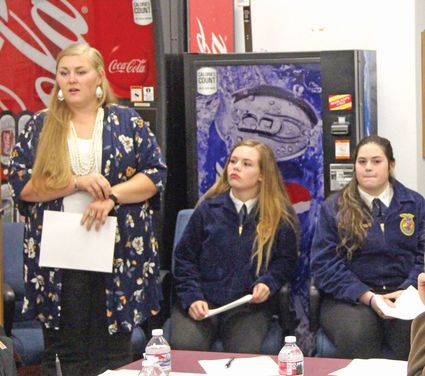 Malta Public School's most recent school board meeting took place last Wednesday, September 11, and at the meeting's outset, Board Chair Mark Knudsen remembered that fateful day in 2001 when the United States was attacked and nearly 3,000 people lost their lives.

Earlier that day, Malta Elementary, Middle, and High School's students and faculty held a moment of silence and tribute for 9-11 at the behest of a few students.

Malta Elementary School Principal Cadance Wipplinger said Principal Fisher contacted her to let he know about the 9-11 tributes at the Middle and High Schools and said the elementary school students also participated at 9:11 a.m. on Wednesday.

"Which opened a lot of appropriate, good questions from kids with teachers being able to navigate that," she said.

"It's just amazing that there was not a single student in our district that was alive when (9-11-01) that happened," added Malta Middle School Principal Shawn Bleth. "It's amazing that it has been that long already."

During his report, Principal Bleth reported that the school's open house that took place during the second week of school seemed to have been better attended than prior years.

Principal Fisher, during his principal's report, said that the Malta FFA Chapter recently attended an event in Roy and would be returning there for another event this week. He said that health, vision and hearing test will take place at MHS on September 24 and ASVAB Test will be taken by juniors and seniors on September 25. Homecoming week at MHS starts on September 30.

Principal Wipplinger reported that the elementary school has an enrollment of 220, said the Missoula Children's Theatre will be in town soon, said the open house was very well attended and announced the school's recently held a fire drill and some of the kindergarten students didn't take it so well.

"The kindergartners freaked out," she recounted. "We will probably have some more of those ...there was lots of crying."

First-year Malta High School teacher and FFA advisor Christina Fister was accompanied by Malta Chapter President Jordan Markuson and Recorder Tamela Abrahamson attended the night's meeting and reported that they would soon start to fundraise for their annual trip to the National Convention and Markuson explained some of the fundraising ideas for the trip included a "kiss the pig" activity.

"We want to place piggy banks in the teacher's rooms for a kiss the pig contest," she said.

The event would take place during Homecoming Week at MHS and each of the school's teachers would have piggy banks placed in their rooms. The three teachers who received the most money in their banks would then have to kiss a pig, a sheep, and a goat, respectively. The kissing is scheduled for October 4 and the PCN plans to be in attendance.