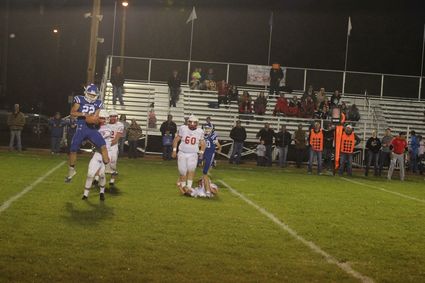 Senior Callan Mears gets up for an interception that he would return 16 yards for a touchdown.

"It feels good," Mustang senior Tanner Smith said about their two-win start. "I don't know what else to say. Everyone is executing. The line is blocking perfectly. The holes were huge. You couldn't ask for a better hole from the lineman."

"Wolf Point has a number of good athletes that will present challenges for us if we don't contain them early in the game," Malta Mustangs Head Coach Nick Oxarart said. "Wolf Point always plays us tough on their home field."

Coach Oxarart and the Mustangs have a good idea of what to expect from the Wolves and that is a plethora of different plays.

"They have a good quarterback and an ability to line up in many different formations," Coach Oxarart said. "We need to be able to line up correctly and be ready for everything they throw at us."

Despite a couple of early fumbles, Malta bounced back against Conrad in a dominating win, racking up 376 yards, 351 of which came on the ground.

Malta was led by Smith, who had 108 yards and two touchdowns on seven carries.

Williamson scored Malta's first touchdown from three yards out of the endzone. Smith would score on the next drive from 30 yards, putting Malta up 12-0.

Throughout the game, Malta also forced five turnovers on defense, all of which were interceptions. Four of those interceptions occurred in the first half.

Mears scored the first defensive touchdown of his career on a 16-yard interception return, which put the Mustangs up 20-0 in the first quarter.

Mears was asked about the team's performance on defense.

"Everyone was just doing their job, reading the guards," Mears said. "The linemen were getting a push and the defensive stayed with the receivers."

Williamson nearly scored on a 45-yard interception return, in the third quarter but Williamson was tripped up and fell at the 2-yard line. Salsbery punched the ball in the endzone the next play.

Smith scored on a 19-yard run in the second quarter, followed by Salsbery who would not be denied on a 35-yard run. Earlier there was a would-be touchdown reception in which Salsbery would have scored, but Malta was flagged for holding.

"First it kind of started rough, but I got the handoff and the line spread it wide open," Salsbery said. "I couldn't see anyone in the way and I was running and thought, 'God! The Line! Wow!'"

The team welcomed back Pierce Mortenson, who missed the opening game due to injury. Mortenson left a wake of destruction, throwing several monstrous blocks.

"The line was just blowing it up," Salsbery said, still in awe of the line's performance.

On the next drive Conrad's Tommy Hammond wowed the crowd and both sidelines as he split the uprights on a 41-yard field goal kick. He had to re-kick the attempt and drilled both attempts. The score at halftime was 34-3 in favor of the Mustangs.

Conrad scored a pair of touchdowns in the fourth quarter, the first a three-yard pass off the arm of Caden Huntsinger and the second was a 43 pass from Carson Bitney to Huntsinger. The final score was 50-19. 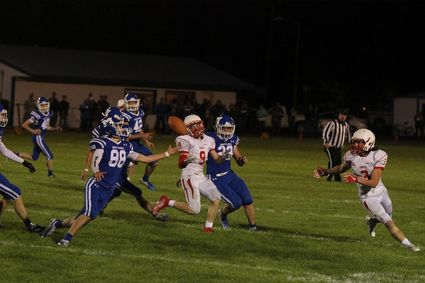 Mustang Jeramiah Benson tips a pass to himself for an interception in Malta's win over Conrad.