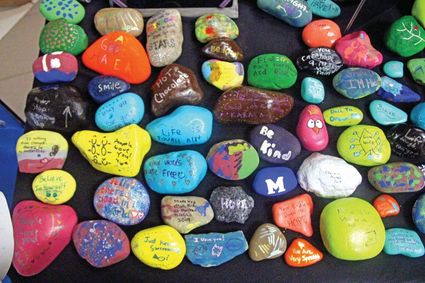 The third annual Phillips County Suicide Prevention Awareness Walk was held in Malta last Sunday, and for the first time since it started, the weather was pleasant as over 100 people turned up at Malta High School for the beginning of the walk on a day where over $1,400 was raised.

The foyer at Malta High School housed the registration table, Remembrance Wall, the Rocks of Hope display, and tables with colored beads for walkers — each color representing a type of personal connection of struggle — with suicide — and literature on mental health. A total of 31 volunteers helped man the various stations at the high school including students from the Builders Club, Boy Scouts, Girl Scouts, Gina Lamb, who has helped organize the event for the last three years, told the PCN. Phillips County Health Department Nurse Jenny Tollefson opened with a short introduction about the day and a question her son had asked before the walk.

“He asked me 'how is walking going to keep somebody from killing themselves’ which is a very honest question,” she said. “That got me thinking about why are we doing this?”

Tollefson said explained to her son that the walk is to show awareness for the issue of suicide and remember those who have taken their own lives and how that affects the people who are left in the aftermath of a loved one’s suicide.

“It’s those two things and all the prevention work that needs to happen,” she said. “That’s why we are here today.”

Michelle Wright, a nurse at the Phillips County Hospital, was asked to talk before the 3-mile walk got underway and she said that as of 2017, Montana has the highest suicide rate in the United States at 28.9 suicides per 100,000 people (the national average is 14 suicides per 100,0000 people.) A report published by the Montana Department of Human Health Services in 2018, states that for the first time, suicide has surpassed car accidents as the number one cause of injury-related deaths in the U.S. and the same reports states that suicide is the second leading cause of death among young people (ages 15-to-24) and only accidents and homicide occur more frequently.

“We are in the backyard of the Fort Belknap Indian Reservation, and Native American youth in the state of Montana alone, have a suicide rate of 42.8 per 100,000 people,” she said. “As health care providers, as teachers, as neighbors, and just as human beings, we have to do better. We have to be better about how we handle this how we stigmatize (suicide) … we have to understand that because the statistics speak, and they speak loudly.”

A total of 81 people registered and participated in the walk on Sunday including members of the Malta High School football and volleyball teams.