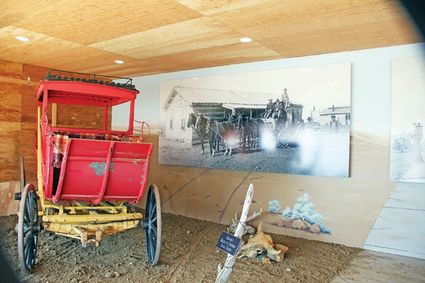 The Malta-Zortman Stage Mud Wagon at the Antique Modes of Transportation Museum Grand Opening in September of 2014. At last week's Malta City Council meeting, the Council heard a request for assistance in getting the wagon back to Phillips County.

The Stagecoach Restoration Committee, represented by Malta's Jane Ereaux, requested the City of Malta write a letter of support for a grant the group is applying for to bring the Phillips County Malta-Zortman Mudwagon home from Bozeman where it has been the last several years being restored.

The Mud Wagon has a long and storied history in Phillips County and was originally in use from 1904 until 1915 when it was used to transport passengers between Zotman, Malta, and Dodson. At last Tuesday's Malta City Council meeting, Ereaux recalled playing on the wagon at a local park years ago when she was a child, and eventually the vehicle was gifted to the City of Malta and spent many years at the City Shop where it was left in the elements and started to fall apart. In September of 2014, Ereaux and the Phillips County Museum and Phillips County Historical Society opened the Antique Modes of Transportation Museum east of the Phillips County Museum on Highway 2 where it was hoped the Mud Wagon - now on permanent loan from the City of Malta to the Historical Society - had found its final home (also in the Modes Museum is a 1930 Model A Ford Standard which was originally purchased in Malta). The Antique Modes of Transportation Museum was built in honor of Claude "Ezzie" Ereaux who was a Phillips County entrepreneur who passed away in 2004.

It was shortly after that 2014 dedication that Dr. Curtis had the Mud Wagon sent to a wagon restoration professional located in Bozeman, Mont., in the hopes of having the wagon looked at for an estimate on how much it would cost to restore. Unfortunately, a miscommunication between Dr. Curtis and the restoration expert occurred and work on the Mud Wagon began instead of the estimate work.

"Since that happened, we all agreed that (the wagon) really did need refurbishing," Ereaux said.

The estimated restoration cost is $32,000. To date, Ereaux and crew have raised $12,500 and are currently applying for a grant for $13,000 through the Montana Office of Tourism and Business Development (a similar grant was applied for and denied in 2017.) If the grant request is approved, another $6,500 will be needed to be raised as match money. Donations for the restoration can be made at the Phillips County Museum or at an account started at The First State Bank of Malta, or at donation boxes for the projects set up around Phillips County.

Ereaux said there are not many wagons like the Malta-Zortman Mud Wagon still in existence in the world.

"We asked (the restoration expert) to really minimize the cost as much as he could so it may be less than (the $32,000) estimate," Ereaux said. "We really want that Mud Wagon back in that museum. Right now, there is a sheep wagon in there that doesn't belong there."

The Malta City Council agreed to be the sponsor of the grant for the restoration work and discussed donating money to the cause but tabled the idea until the next Council Meeting.

In other new business at the meeting, the City Council talked about Resolution 1276 which is the "intention of the City of Malta to modify the basis on which sewer rates are charges thereby increasing rates for the use and availability of the municipal sewer system," the resolution states.

"The Legg Lift Station is being replaced and we have to pay for it," Malta Mayor John Demarais said.

A sewer rate increase of $4.50 per month is being proposed .Mayor Demarais said that the City Council will hold a work meeting to discuss the increase and suggested a public meeting be held on the sewer rates. The City of Malta sewer rates have not been increased since 2006, according to Malta City Clerk Lorie Bond. Resolution 1276 was tabled for further discussion.

In other City of Malta news, stop signs will now dot many intersections near 5th Avenue East, 1st Street, and 8th Street East after a concerned Malta citizen voiced his concerns about the danger of driving that area of the town on social media.

"A little history on 5th Avenue East," Mayor Demarais said. "There used to be stop signs on every intersection on 5th Avenue, but people didn't like them and took them down over the years."

A motion was made and approved, 4-0, that stop signs would be reinstalled (in some instances replacing yield signs) down 5th Avenue East, from Second Street to 9th Street. 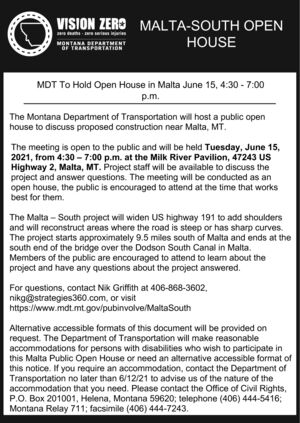