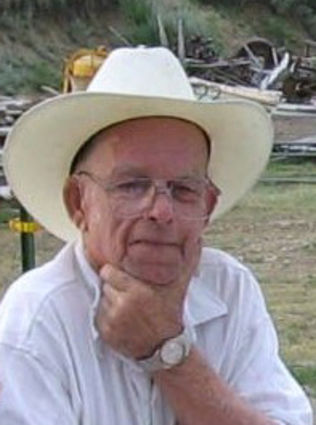 Condolences for the family may be left at http://www.kirkwoodfuneralhome.com.

He was born in Malta on November 11, 1922, and lived there most of his life. He moved to Helena to attend school after graduating from Malta High School in 1939, where he met and married Margaret Geraldine Craig in 1942. They made a permanent move back to Malta in 1954.

Ned was a hard worker all his life, beginning on the farm with his parents and siblings. He was a charter member of the first FFA chapter in the school. After moving to Helena, he worked on a farm, as a carpenter and for the railroad delivering freight. He always kept his hand in what he had learned on the farm, raising animals including rabbits, chickens, pigs, and milk cows. This provided food for the family and connection to his roots. He returned to the farm/ranch in Malta in 1954 when his father could no longer handle the work because of ill health. In 1972, Ned sold the farm and moved to Malta eventually establishing Malta Tire Center. Later he and his son Craig sold the tire business, and with Craig and Mary established The Glass Shop where Ned operated B&B Sales. They continued there until 2018 when they both sold and retired.

He was preceded in death by his wife Margaret, a son Craig, his parents John and Linna, a sister Dorothea Mangis Hurlburt, and brothers Herb and Vern. Survivors include a sister Marjorie Mangis Johnson; daughters Sharon Kay (Ted) Hansen and Mary Geraldine Mangis; sons Howard Kimball (Eva) Mangis and Michael William (Patricia) Mangis; daughter-in-law Mary Alice (Taylor) Mangis, thirteen grandchildren, 31 great-grandchildren, and 2 great-great-grandchildren. He had many nieces and nephews on the Mangis and Craig sides of the family. They include many of the decedents of Turner and Maude (Knapp) Waters, who were sister and brother-in-law to Linna Mangis. The two families were among those who homesteaded south of Malta in the early 1900s.

Ned enjoyed studying and writing. In his 70's he took correspondence courses through Ligonier Ministries and R. C. Sproul, which included essays and tests. He also wrote many letters, especially to his grandchildren, and wrote recollections of his life on the farm. He kept several notebooks with excerpts from books he read and significant Bible verses. Over the years, he was active in his church, including teaching, singing, serving on boards and committees and occasional speaking. He sang, alone or in groups at church, for funerals and civic events. He and Margaret enjoyed going to auctions and taking rides in the country or visiting neighbors. Ned collected owl figurines and pictures, and read and studied his Bible every day

People would often stop at his business or home to talk and share with him. Almost every day, starting when he worked on the farm, he would take a short nap. Some think that contributed to his longevity, that and Margaret's good cooking and the delicious well water on the farm. Later in life, he bemoaned the fact that he had trouble remembering names, though he always remembered the people. One of the best things he did was to keep a running list of people for whom he prayed. You may never know you were on the list, but he kept a battered notebook to which he often added people. He will be dearly missed by those who knew and loved him.

The family would like to thank the Hi-Line Retirement Center for all their care.