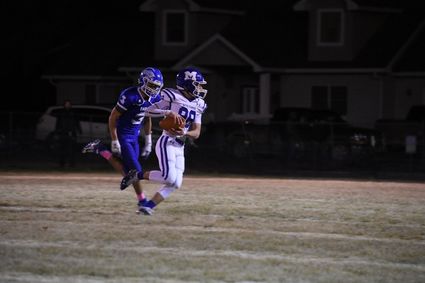 Jeramiah Benson pulls in a catch that he would net the team 32 yards.

The Malta Mustangs football team will look to bounce back in their final regular season game of the year on Friday, October 25, after suffering a 34-0 loss to the defending State B Champion Fairfield Eagles last Friday, October 18.

The Mustangs will look to defend Mustang Field against the Cut Bank Wolves this Friday at 7 p.m. Though the Wolves are only 2-6 this season, the Malta Mustangs are not expected to take them likely, especially after the Wolves defeated Harlem 66-0 last Friday, October 18.

"The Cut Bank Wolves have a stout defense that doesn't give up many points," Coach Nick Oxarart said. "We will have to be more physical and technically sound than we were last week in order to have success against Cut Bank."

In Malta's loss to Fairfield, the Mustangs turned the ball over five times and were unable to overcome those turnovers.

"We had too many turnovers in Fairfield to have success," Coach Oxarart said. "They are a very good football team."

Malta's defense also failed to stop an Eagles offense that gained a total of 399 yards. Fairfield, who is Class B's Top-Ranked team, gained 257 yards on 47 carries and 142 yards with their passing game.

"We knew it was a tall task to contain their quarterback, Keeley Bake, and we had trouble doing that," Coach Oxarart said.

Malta's offense also struggled, making it within three yards of scoring a touchdown, but failing.

"We had a couple opportunities to score in the red zone and weren't able to punch it in," Coach Oxarart said. "We didn't do a great job of tackling and had too many missed tackles."

Malta was led by Rex Williamson, who had 59 rushing yards on 17 carries. Tanner Smith had six rushes for 25 yards. Cash Salsbery had eight yards on six carries.

Kooper Oxarart threw for 39 yards and was 2-for-8. As a team, the Mustangs threw three interceptions and lost two fumbles.

Even though Malta is amoung Class B's top-ranked teams, the Mustangs knew that Fairfield would be tough compared to most of their opponents they steam-rolled earlier this season. Still, the Mustangs welcomed the challenge.

"This was a good learning experience for all of us and we will work on many things in practice and work on getting better each day," Coach Oxarart said.

Though the team suffered a tough loss, they are aiming to get focused as their final regular season game approaches, followed by the opening round of the playoffs.

"The key to bouncing back this week will be to focus on the little things that we can control and the small details of the game that have a big impact on success," Coach Oxarart said.