Lights, camera, action at the movies 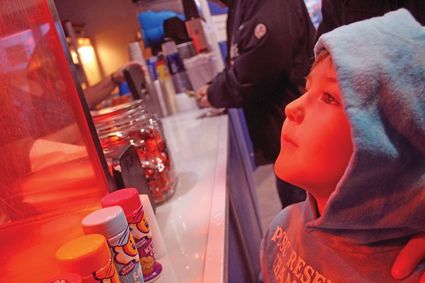 Roan Korman, age 5 of Malta, made his first trip to the Villa Theatre last Friday night for the movie house's official grand re-opening. Korman eyeballs the soft pretzels at the Villa concession counter ahead of Friday night's movie.

The proof is in the pudding and those in charge of getting the Villa Theatre back up and running saw their hard work pay off last weekend as the movie house held their grand re-opening last Friday night in Malta after being closed since this summer.

"The turnout took me by surprise, I don't think I was prepared for it," said new Villa manager Christine Riggs after two successful showings of The Addams Family on the night. "I hope people like the new 'new Villa,' I don't know if I had time to hear their thoughts."

While Riggs and the new Villa crew worked away Friday night at the re-opening...