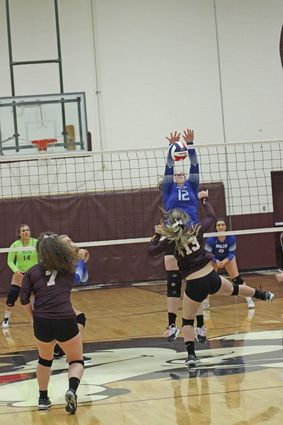 Malta senior Carly Garfield goes up for a block in their loss to Choteau.

The season ended for the Malta M-ettes volleyball team as they fell 3-0 to the Glasgow Scotties in the elimination bracket of the Northern B Divisional in Wolf Point on Friday, November 8.

The Lady Scotties would go on to defeat the Fairfield Eagles and Shelby Coyotes, to punch their ticket to the championship game. They would lose to Choteau in three games.

The Malta M-ettes squared off against the Choteau Bulldogs and lost in three sets on Thursday, November 7. The scores were 25-5, 25-9, and 25-7.

The M-ettes were able to celebrate a win at the divisional tournament as they defeated the...