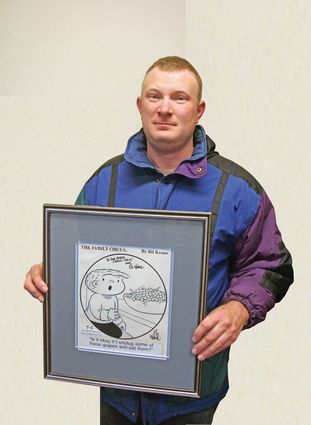 29-years ago, Malta's David Veseth provided a one-liner for the popular "The Family Circus" comic. Veseth, pictured above on the Billings Gazette in 1990 (small) poses with the original, signed comic strip today.

Nearly 30 years ago, Malta's David Veseth, then living in Laurel, Mont., and but age four at the time, quipped "Mommy, can I unplug some grapes and eat them?" as he looked at a bowl of grapes and thought they looked like they had power cords attached.

The memory came up last week after David's mother, Rosemary (herself a Phillips County News Contributor) came into the PCN office to talk about her son's latest Malta Construction Update, a feature he writes for this newspaper on a weekly basis.

"I get people coming up to me quite often saying how much they enjoy his column," Rosemary said. (E...