Ushering in the Holiday Season at Museum

'Christmas Memories' Social at P.C. Museum fun and food for all 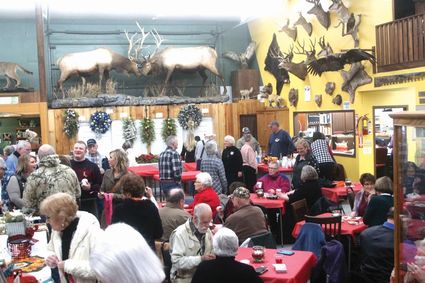 Guests at the P.C. Museum and Historical Society's "Christmas Memories" Social ate, drank, and were merry last Thursday in Malta.

It was a night of "Christmas Memories" at the 16th Annual Phillips County Museum and Historical Society holiday social last Thursday night... as well as a few other memories.

As visitors took their seats at the museum with plates filled with various types of food and deserts - and, for some, some stiff Tom and Jerry drinks - Historical Society President Kay Hould welcomed the large crowd and laid out how the night's bucket raffles, silent auctions, and live auctions would play-out, she called long-time Phillips County Auctioneer (and Museum Social Auctioneer 15 out of 16 years) Cliff Rustad to the stage for a thank you card and a gift from his past.

"Many thanks to our talented and devoted auctioneer," Hould red the card to Rustad. "Were it not for this memoir, you might not have been as gifted with the ability to read and speak. You are the best, here are your roots."

Hould presented a giftwrapped package to Rustad and when he opened the gift, he discovered it was a copy of a "Dick and Jane" book, popular in schoolhouses from the 1940s through the 1960s.

"Look inside the cover," Hould prompted.

"Cliff Rustad, January 1948," Rustad read his name which he had written in the textbook some 71 years ago when he was an elementary school student. 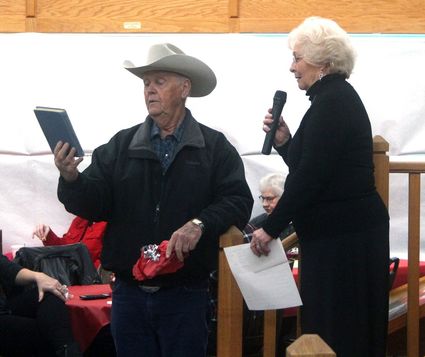 Cliff Rustad receives a copy of "Dick and Jane" at the PC Museum Christmas Social last week, the same book he put his name in when he was seven years old.

"Why I wasn't even born yet, or maybe I was just six-months old" Rustad joked. "Where did you find that at? "I was only seven-years old (when he penned his name in the book.) That's a mighty fine book."

Not to hog the spotlight all to himself, Rustad took over the mic and called on long-time Phillips County mortician Greg Kirkwood.

"I told him I wouldn't pick on him tonight, but I couldn't help it," Rustad told the audience. Rustad said that Kirkwood - at the event with his wife, Jan, both long time supporters of the Museum's Christmas Social - had invited him over to the Kirkwood Funeral Home earlier in the day for a party.

"I walked in and he got fired," Rustad joked. "As I understand it, you did retire today. He sold his business and today was his last day."

The Kirkwoods received a nice round of applause following the retirement announcement.