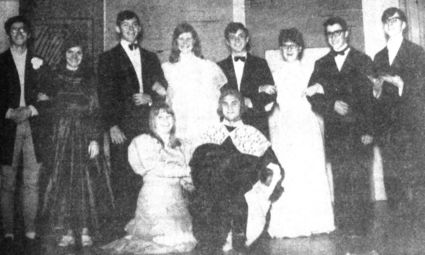 This is the cast of "Charley's Aunt" which will be presented this coming Sunday and Monday and the three-act comedy will be performed by the Malta High School Drama Club. Members of the cast are, standing from the left, Jim Tavary, Pat Malin, Alan Robertson, Pauline Olson, Less Koss, Jackie Taylor, Tim Nelson, and Larry Lewis. Kneeling in front are Mary Lou Erdahl, and Gary Chaney.

The City of Dodson had gone into the coal business for itself as businessmen had opened up a vein of coal near town.

County Attorney Fred C. Gabriel had returned from a business trip to Helena.

The best plays written by six grade pupils were turned in by Violet Veseth and Esther Edwards.

Mr. and Mrs. William Tressler and daughter, Georgia, planned to spend Christmas with the J.M. Braytons in Jamestown, N. Dak.

Miss Pearl Wastson, who had recently returned from overseas, was helping out in the Red Cross work in the Coun...