Lady Mavericks pick up first win of the season 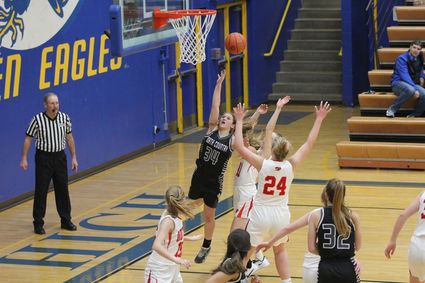 Jaycee Erickson unleashes a floater in the team's loss to Roy-Winifred.

The North Country Lady Mavericks basketball team has struggled to get wins early in their 2019-20 campaign, falling to their first four opponents of the year.

Two of the losses came this week, prior to the team recording their first win of the season as they defeated the Denton-Geyser-Stanford (DGS) Bearcats 50-43 on Saturday, December 14, at the Lewistown Invitational.

"They were a pretty solid team," Lady Mavericks Head Coach Amber Erickson said of DGS. "It went back and forth. We got a good jump on them in the first quarter."

Kaitlyn McColly led the team in their win with 17 points and five rebounds. Kia Wasson had 16 points and four rebounds. Danika Soper had seven points and Jaycee Erickson had six points.

"Mentally and physically, we were exhausted going into that game because it was our third game in a row," Coach Erickson said. "Being so early in the season, it was a long weekend for us."

Coach Erickson said that it was good for the team because it forced them to refocus and regroup.

The team hopes to get one last victory of 2019 on Saturday, December 21, as they travel to Brockton to face the Brockton Warriors. Though the team had made short work of Brockton in most of their meetings over the past few years, Coach Erickson is not wanting her team to overlook any game or opponent.

"That's one of our goals this year; to be prepared to play the opponent in front of us each night," Coach Erickson said.

In their loss of 58-45 to Winifred-Roy, the Mavericks were led by McColly, who had 23 points and seven rebounds. Wasson had 11 points.