New high school Podcast has MHS news covered: 'Get Lost in the World of Podcasting' 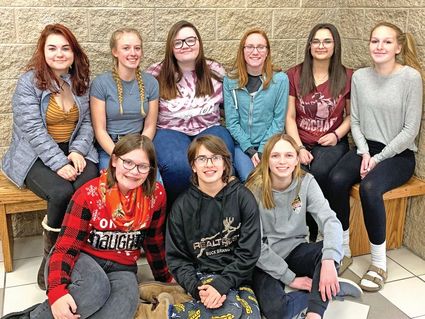 The group is made up of a total of nine girls and one advisor: seniors Kaycee Bond, Bonnie Jones, and Izzy Markuson, junior Leslie Young, sophomores Maddison Stamper, Nikki Nicholson, and Jasmine Hawes, and freshmen Izzie Hallenberg and Sierra White, with their advisor Mrs. Ashley Pankratz. The journalism class takes place during 5th period. These girls put a lot of effort into releasing information to their peers. This year we have decided to change it up a bit and try podcasting. Although it was complicated, we managed to pull it off, and we will still be releasing our Mustang Gazette paper during the second semester.

The community has been curious as to what podcasting is exactly. Podcasting uses the creator's voice and others as well; it is the creation of an audio file that can be downloaded or shared via mobile. Although this may sound simple and easy, there are many steps and skills you must learn before jumping in. "You need to have time and patience, and you have to slow down in order to edit," said Hallenberg.

"I thought it was going to be easy, but it's really not," added Jones. "It requires a lot more time and effort than you think."

With the Steps and skills acquired, it took a few weeks to learn the Audacity program. First of all, we had to get familiar with the program we were using and learn how to insert, clip, and format the audio. Things began to snowball, but we were able to pull through. With the help of YouTube tutorials and a Mustang Gazette-created Google slideshow, we were able to get to work.

Before we began recording, we all had to decide on relevant topics to the student body and community audiences. Hallenberg decided on her topic of homecoming because "Mrs. Pankratz really wanted someone to do homecoming topic."

The second topic, chosen by Markuson, was Christmas vs. Thanksgiving, "which was actually really fun to do," she addded. "Topics can vary depending on the listeners or the creator's interests."

Jones decided to take a swing at a more controversial topic of global warming. She stated when her podcast was first released that she "expected a lot of backlash because my topic was very controversial."

Deciding on a topic is one of the hardest parts as a writer and producer. You run into issues with choosing what interests you versus what your peers would enjoy. Picking a topic is the first step to determining a podcast, then leading into interviews. After writers have decided who they'll be speaking to, they will then find a quiet area to record.

Producers don't want too much echo or noise because audio must come out clearly. Next, the creator must import audios into the program to use. Finally, the editing process is critical to the entire podcast because any mistakes, bloopers, or audio mistakes have to be fixed. Although some issues are bigger than others, it takes time and patience. After editing, a peer needs to listen and add notes to make the podcast perfect for the audience.

We may have made podcasting sound stressful and hard, but it's truly not after learning the skills and tips. Creators will find themselves lost in audio and editing. Before they know it, they catch themselves blowing through the creation of another within days.

We also decided to ask Jones how long the whole process of creating took.

"A month and a half, including all the research," she said.

Podcasting was really fun, but if podcasters do not take time and don't pay attention to what buttons they click, it could result in accidentally deleting some audio. After releasing our first set of podcasts, Hallenberg said

"I was really anxious and really nervous about it. My mom listened to it," she said.

Hallenberg went on to share how awkward hearing the sound of your own voice can be initially.

After talking to a few of the students, we spoke with the ringleader as well. Mrs. Pankratz is the journalism teacher and introduced podcasting to all of us this year.

"I wanted to get kids into this because it not only teaches scripting skills but Audacity skills," Pankratz said. "It also meets speaking and listening requirements in curriculum. Podcasting requires my student-journalists to talk to their peers and adults in a way that goes beyond normal chatter in the hallways. I wouldn't say it was easy. I'd say it was work just like any other class project, and the effort really came in when we had to work together to learn the Audacity skills."

When asked if she would continue with podcasting and whether she preferred the student paper or podcasting, Pankratz concluded that "I don't know how often we will podcast in the spring; however, I would love to continue through next semester, but not as frequently as we have done this first semester. We want to get into print because it is journalism class, it is doing my students a disservice if they don't touch on podcasting again until next year. Personally speaking, if I teach something for so many years consecutively it can lose that excitement from the first time it was taught. It's exciting to release these podcasts and promote their work. It is amazing what these student-journalists are capable of. I'm extremely proud of my students and the best compliment you can pay them is to listen to their work."

Listen to the podcasts by clicking on the quick link titled Mustang Gazette or by typing https://www.malta.k12.mt.us/Page/1081 for the URL. They will be located at that address. We would like to give a huge thank you to the community for following us as we complete our work. Thank you to those who have listened to our podcasts, and we hope more of you will tune in!