Malta heads to Winter Break with a win 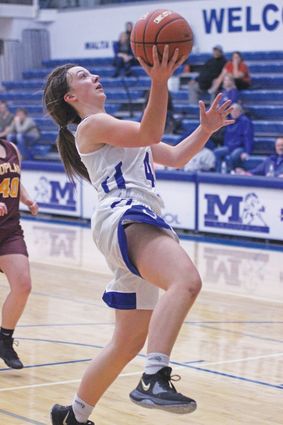 Kylee Nelson had 17 points in Malta's home opener against Poplar.

The last game of 2019 was a statement win for the Malta M-ette basketball team who blew out the Poplar Indians 75-32 last Saturday, December 21, in Malta.

"We all just played very well together tonight and we played good defense," M-ette senior Carly Garfield told the PCN.

One night prior the M-ettes fought but fell 48-47 to the third-ranked Harlem Wildcats in Harlem.

The M-ettes will head to break, where they will hold a few practices throughout Christmas Break. The team is scheduled to open their new year against the Wolves in Wolf Point on Friday, January 3. They will then face the 2018 and 2019 Class A champion Havre Lady Blue Ponies in Malta on Saturday, January 4.

Malta rode the momentum of a 24-4 start in their win over Poplar, The team was led in scoring by freshman Kylee Nelson who scored 14 points.

Freshman Allie Kunze scored 12 points, all of which came in the first half.

Denham, who suffered a season-ending knee injury last year, played her first home game since the injury. She shared her thoughts on being back.

"It feels really good," Denham said. "I have been missing it. It's good to be back with my girls and it's good to be playing with Kylee and all of the other freshmen. It feels good."

For Nelson, it was her first home game as an M-ette.

"I was nervous but, I think it helped me play with more intensity," Nelson said.

Nelson shared what making the jump from junior high to varsity was like in terms of competition.

"The level of play is a lot higher and it is harder but I feel like you have to rise to the game's intensity and you will do good," Nelson said.

The freshmen class has not only helped the M-ettes offensively but mentally and physically. 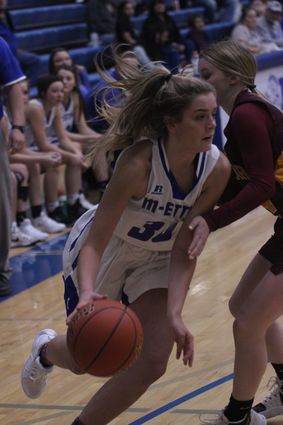 Addy Anderson drives to the hoop during Malta's win.

"They really push us to be better offensively and defensively because they are really easy to work with and feed off of," Denham said. "They help us overall and they are really good to play with."

The M-ettes lost a close game to Harlem on Friday, the score was 48-47. In that loss, the team was led by Addy Anderson who scored 14 points. Garfield had a 12-point, 12-rebound double-double.

"Harlem is a pretty quick team and we had to be pretty quick with them and play with their intensity because they were very intense and very scrappy," Garfield said.

The M-ettes had to go against L'Tia Lawrence, who scored 20 points.

"She is a great shooter and she is a great ball-handler," Garfield said of Lawrence. "As long as we stay on our toes and stay in front of her, we should be fine."