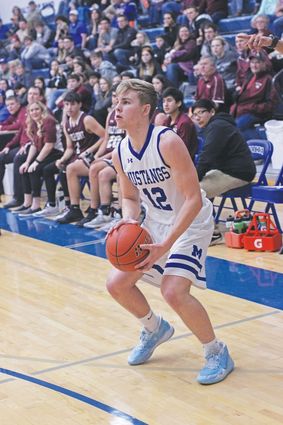 The Malta Mustangs split game last weekend winning their first game of the 2020 year 54-42 over the Wolf Point Wolves in Malta on Friday and losing 66-47 to the Havre Blue Ponies on Saturday.

In the team's win over Wolf Point, Malta went on a 15-0 run in the third quarter, led by junior Kooper Oxarart who sank three treys during the run. Oxarart led Malta in scoring with 22 points. His night included a total of four treys and was a perfect 8-of-8 outing at the free-throw line.

"A big key to that run was being patient," Oxarart said. "Once we got the ball moving, we would swing it four or fi...