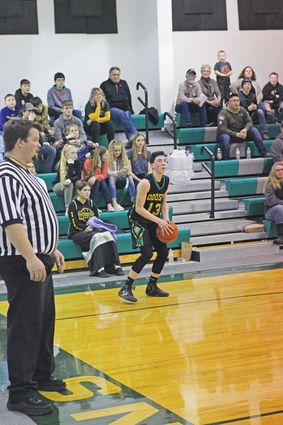 Dodson's Jeramiah Benson knocks down a trey late in the team's win over North Country in Whitewater last Saturday.

It was a contrast of events for the 3C boy's teams in Phillips County as the Dodson Coyotes went 2-0 this week, while the North Country Mavericks went 0-2.

The Coyotes and Mavericks faced each other on Saturday, January 11, heating up the Penguin Palace in Whitewater. Ultimately the Coyotes would win the clash by going on a ten-point run in the fourth quarter, defeating North Country 50-39.

Before the Dodson Coyotes' ten-point run in the fourth quarter, the North Country...