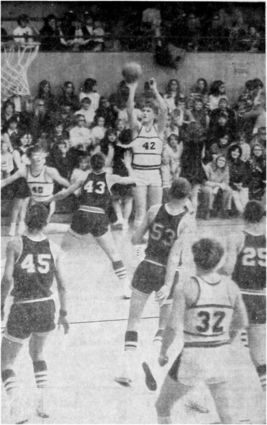 Mustang senior Ken Kaufman, No. 42, goes up for a shot in the game against Fort Benton last Friday evening. Craig LaFond, 40, and Randy Frazier, 32, await the results. The Malta team played one of its best games of the season against the Longhorns and scored 94 points to their opponents' 58. Duane Walker was the high-point man in the win with 29 points.

Fire of undetermined origin did considerable damage to the interior of the Arcade Meat Market and the adjoining Lee Hardware store on Fifth Avenue.

Ole Jensen, a Dodson farmer, was killed when the car he was driving overturned on the road between Savoy and Coburg.

Schuyler Leedy reported four inches of snow on the Missouri River and said ranchers were busy with feeding operations.

Carl Veseth, who was attending school at Miles City, had been at home visiting his parents.

Passenger Train No. 2 was wrecked at Wagner by a faulty switch. No one w...