Coyotes to take on undefeated teams 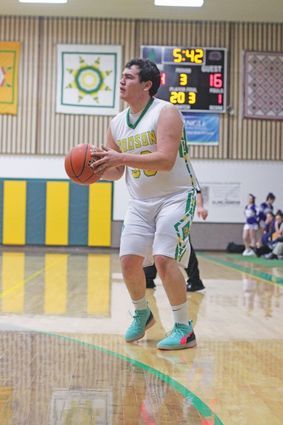 Shaun Ball squares up a trey attempt in an earlier game.

The Dodson Coyotes basketball team posted a pair of wins against 3C foes last weekend. The team will have their hands full this weekend as they prepare to face two tough, undefeated teams.

Dodson, who is 9-1, is set to face the Melstone Broncs and the Scobey Spartans, who are both 10-0 this season.

The Coyotes showed off a stifling defensive effort in their 62-7 win over the Frazer Bearcubs last Friday, January 17, in Frazer. The Coyotes did not allow a single point in the first half. The team only allowed two treys and one free throw made in the entire game. Frazer was 1-for-6 from the free-throw line.

Dodson was led by Zerek Jones, who scored 13 points. Corbin LoneBear scored 11 points which included an alley-oop dunk in which he tossed himself the ball. Juliun Benson had 10 points and Shaun Ball had seven points.

Their game against Lustre was much closer, as the Coyotes were only up 22-19 at the start of the fourth quarter, but Dodson outscored the lions 7-8 in the fourth to pick up a 39-28 win.

LoneBear led the effort with a total of 15 points, Ball had seven points, Jones added six.