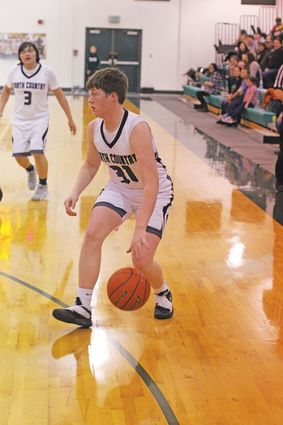 Aiden Albus made the most of his minutes against Brockton. The sophomore reserve netted 14 points last Saturday.

The North Country Mavericks basketball team picked up a 64-32 win over Brockton on Saturday, January 25, but the squad was unable to avoid a sweep by the Glasgow Scotties, falling 58-43 on Friday, January 24.

"We knew they (Glasgow) were playing better and their post player was playing well," Mavs Head Coach Ralph Ellsworth said. "We were trying to figure out how to handle him and we didn't get that done."

Glasgow's Keigan Skolrud had a dominant 35-point outing against the Mavericks.

Coach Ellsworth went on to praise his team, saying that despite the loss, he knew they played a hard and complete game.

"We just kind of lose ourselves and don't get stuff done that we should get done," Coach Ellsworth said. "If we can correct that then we could be pretty tough."

In North Country's win over Brockton, the Mavericks were led by Jon Rey Taylor and Loden Idler who each scored 12 points. Jesse Lee added eight points.

In the Mavericks' win over Brockton, the team was led by Idler who scored 16 points.

Coach Ellsworth was asked about the physicality of last Saturday's game, a game in which both teams played tough defense despite the score.

"We are trying to get our kids to get after it against the better teams," Coach Ellsworth said. "You don't want to come here and not get after it."

The Mavericks are scheduled to face the Nashua Porcupines on Friday, January 31, in Saco. The night will serve as Senior Night for the Saco High School seniors, including Dustin Ostrom and Brady Albus.