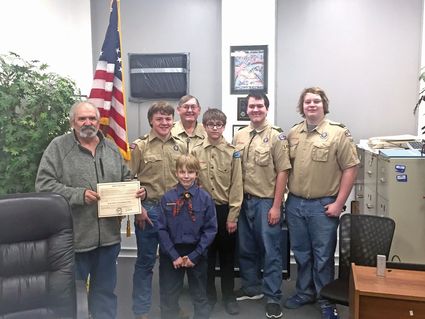 There were four members of Malta Boy Scout Troop #1429, along with three of their adult leaders and one member of Malta Cub Scout Pack 432 attending the final Malta City Council meeting of January and got a royal treatment.

Malta Mayor John Demarais welcomed troop members Dre Oshio, David Schaldack, Eion Estill, and Marcus Knudsen, along with troop leaders Mark Knudsen, Steve Schumacher, and Sean Estill, along with den member Benjamin Schiffbauer to the nights meeting before requesting Oshio present the US Colors ahead of the National Anthem. After the Anthem, the Scouts led the council, th...