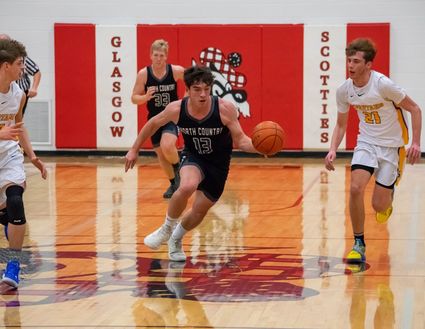 Jesse Lee dribbles down the court at the District 3C Tournament in Glasgow.

The season came to an end for the North Country Mavericks as the team fell to the Lustre Christian Lions 51-38 in overtime of the Consolation Finals of the 3C District Tournament.

Despite the team outscoring Lustre 22-14 in the second half, the Mavericks were outscored 18-0 in the overtime period, bringing their campaign to a bitter end. The Lions made all 16 free throw attempts in overtime, ten of which were scored by Kolden Hoversland.