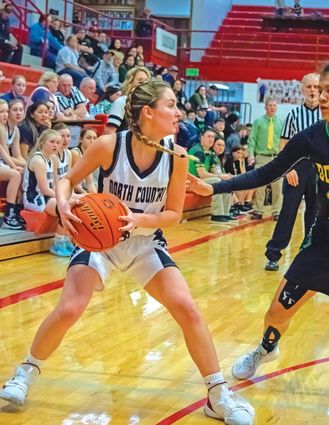 Senior Elise Strommen looks to pass in Glasgow during the District Tournament.

The season ended for the North Country Lady Mavericks as they fell in the consolation finals against Froid-Lake, a team they defeated in the opening round.

In all, the Lady Mavericks went 2-2 at the 2020 Eastern C Divisional in Glasgow last week. The tournament featured teams from the 2C and 3C District Tournaments.

The tournament was won by the Scobey Spartans who defeated the Mon-Dak Thunder 40-36 in the Championship Game on Saturday, February 29.

The Lady Mavericks were off to a solid start, winning a nail-biter against Froid-Lake on Thursday, February 27. The score was 45-44.