Malta voted as best against 16 teams 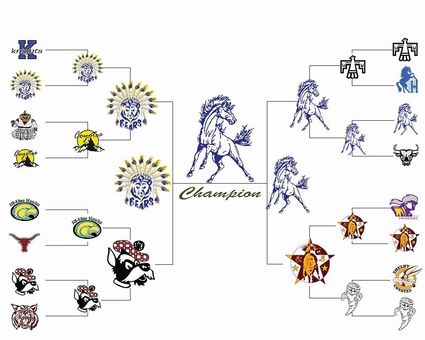 The Malta Mustangs Logo was selected as champion in the Duchscher Kapperud Insurance Mascot Madness bracket held on Facebook. The event was shared close to 2,200 times. Malta defeated Box Elder in the championship round last Friday.

Duchscher Kapperud Insurance (DKI), a company in Havre gave the Hi-Line a very important question to be answered through social media; who has that best school mascot in Northeastern Montana?

According to voters in the Duchscher Kapperud Insurance Mascot Madness competition on Facebook, the answer was in fact, the Malta Mustangs. The Mustangs edged out the Box Elder Bears on Friday, April 3, in a competition that featured 16 teams including the North Star Knights, Box Elder Bears, Chinook Sugarbeeters, and Dodson Coyotes in Group A, The Hi-Line Hawks, Fort Benton Longhorns, Glasgow Scotties, and Harlem Wildcats in Group B, The Hays-Lodge Pole Thunderbirds, Havre Blue Ponies, Malta Mustangs, and North Country Mavericks in Group C, and the Big Sandy Pioneers, Rocky Boy Northern Stars, Shelby Coyotes and Turner Tornadoes in Group D.

The competition started on Monday, March 16, after the announcement that all NCAA March Madness Basketball tournaments were canceled amid the COVID-19 virus pandemic.

"We could tell that everyone was a little bummed after all of the sporting events were canceled due to COVID-19," said DKI agent Karston Donoven. "Therefore, we wanted to create a fun and positive competition that people could follow along with and still be able to show their school pride."

Donoven said that with the office being located in Havre, the company went as far in every direction that they needed to go to fill the 16-team bracket.

When asked which team he thought might win the event, Donoven remained diplomatic, stating that the agency loves and supports each on the teams listed in the competition.

"It was always fun to see which school would get the most votes because we honestly had no idea how each match-up would end up," Donoven said. "This competition definitely exceeded our expectations in a great way. I believe the main reason was that every town in this area has amazing school pride!"

The competition posts had been shared 2,190 times, with the semi-final match between Box Elder and Glasgow earning 558 shares being the most in the entire competition. Malta's clash with Box Elder garnered the second most in shares with 408.

According to Donoven, The DKI Agency has been around since 1980 and is owned by Wally Duchscher and Melissa Kapperud. The Company has six licensed agents with over 70 years of combined experience.