These are the Malta High School delegates and alternates chosen to spend a week in Swift Current, Sask., as apart of the annual Kiwanis Malta-Swift Current Student Exchange program. From the left they are Keith Maristuen, Thelma Wiese, Tim Nelson, and Maureen Golik. The alternates are Dan Mathews, and Kari Green. PCN 1970.

Hubert Simms had withdrawn from school to go farming.

Baccalaureate services were held at the Congregational Church for the graduating class of four girls and two boys.

Successful servicemen in the drawing for reclamation land east of Saco where John Snell of Saco, Ole Olson and T.J. Larson of Malta.

Mrs. John Survant and daughter, Anna Lee, had returned after spending the greater part of the winter in California.

Cpl. Glen S. Lyden, son of Mr. and Mrs. Harry Lyden of Malta, was killed April 15 over Arabia, according to information received by the family Sunday.

Cpl. Lyden, a navigator-radio operator in the ferrying command, presumably was on a flight when he met his death, although no details have been received as yet.

Born at Malta on June 29, 1922, Cpl. Lyden attended Malta Grade School and graduated from Malta High School with the class of 1940.

The most serious prairie fire of the season occurred Saturday afternoon when a stubble fire broke away and raced over the bench between Assinniboine Creek and Cottonwood Creek. Destroying approximately 221,000 acres of grass and several stacks of hay.

The fire started near the Ed Palmer place, 16-miles northwest of Malta, and burned to within about a mile of the Milk River north of Freewater. The wind was so strong that all efforts to check it were impossible. Tractors were used to plow fireguards on the north and south and efforts of farmers and ranchers in the vicinity were concentrated on saving buildings in the path of the fire.

No telephone being available, there was no way of contacting local and deferral agencies in Malta to secure additional equipment and the dust was so thick that the fire could not be seen from town.

Heaviest losers in the fire were the Forbes Brothers, Francis Costello, and Walter Kropp.

The Malta war prisoner camp site was approved Wednesday by the army camp site board made up of three army officers and two civilians and work of remodeling the barracks and other buildings will be complete by May 20, when the German prisoners assigned to the Malta district as sugar beet workers are expected to arrive.

The Utah-Idaho sugar company purchased 36 CCC granaries and had them moved to the site of the former civilian conservation corps company in Trafton Park.

Guard towers have been completed and the camp site is being enclosed by a wire barricade. Lights will be installed on the grounds, but no lights will be permitted in the barracks. About 250 German war prisoners will be housed in the camp.

Question: So you really think there is much the United State can do to keep ourselves safe from terrorism?

Becky Belstad: No, but we need to be stricter in our punishment of terrorists and other criminals. 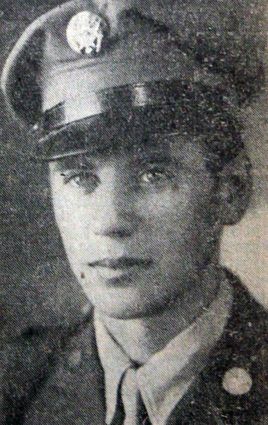 Scott Jaynes: Yes. We need more money in the budget to go toward more policemen on the street.

Diane Mastel: Yes. When they catch them, do to them what they have done to their victim.

Tony Sunford: Yes, be keeping track of people buying suspicious things that can be used harmfully. Also, they can reduce the number of guns in the US.

Musician and vocalist Brady Goss will open for Little Texas at the fair.