LoneBear signs to play at Dawson 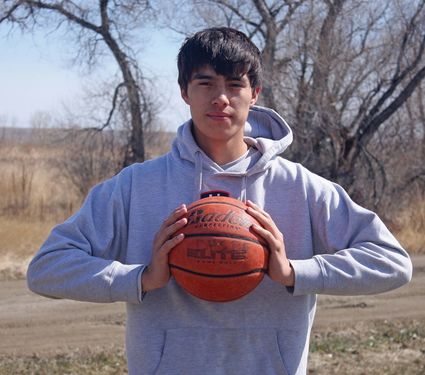 "In seventh or eighth grade, I knew I wanted to keep playing ball, more and more," LoneBear said. "I just wanted to be able to play at the next level."

"He worked and worked," Pat said.

Pat also said that when Dodson High School built their new weight room a couple of years ago, LoneBear took advantage, and added muscle to his frame.

LoneBear, who was named to the District 3C All-State and All-Conference team in his senior year, was approached by Dawson Community College Head Coach Joe Peterson during the 2020 Eastern C Divisional Tournament. By the conclusion of that tournament, Dodson made school history by winning their first Boy's Divisional trophy since 1966.

"We are excited to have Corbin join our program," Coach Peterson said. "He has a lot of potential as a basketball player. I think by training consistently and going up against high-level players, he will grow and develop into that potential!"

LoneBear had garnered the attention of schools out of state. Though picking a college was stressful, LoneBear knew that he wanted to be close to home. That left him with the option to join DCC or Rocky Mountain College in Billings.

"I knew more about Rocky than I knew about Dawson," LoneBear said. "But I felt that the coaches wanted me more at Dawson."

Though he has no idea of what DCC's playbook contains, he has done some research by watching videos from last year's team, stating that he saw the team score a lot of fastbreak points.

LoneBear also said that at Dawson, he would have more exposure to bigger colleges. LoneBear hasn't had the chance to see the DCC campus due to the COVID-19 virus pandemic, which shut down colleges around the country this spring. He has been on the campus thanks to campus visits with Dodson High School in 2018.

"We were skimming through a lot of colleges during the trip," LoneBear said.

His mother, Sarah, has a conference champion trophy with the Dodson Lady Coyotes in 2002-2003. His father, Pat, played basketball with Dodson Middle School until eighth grade. He said that he used to beat Corbin in the game 21, but now he can't even score.

Though LoneBear has no immediate family ties to DCC, his cousins, Wes KillEagle Jr., Clayton KillEagle, and Francine KillEagle all attended Dawson.

LoneBear shared his favorite memory from playing basketball in Dodson, and it was not the aforementioned divisional trophy win from this season; it was the team's milestone from the 2018-19 postseason. That year Dodson defeated Richey-Lambert in the opening round of the 2019 Eastern C Divisional Tournament. LoneBear had a 22 point, 14 rebound effort, along with four steals. That victory was the team's first divisional win since 1966.

"We went into overtime and for the last few minutes of the game everyone was standing up," LoneBear said.

LoneBear is also Dodson's single-game scoring record holder. He set the record of 45 points in Dodson's win over Nashua on December 20, 2018.

For his education, LoneBear plans to study the field of athletic training.