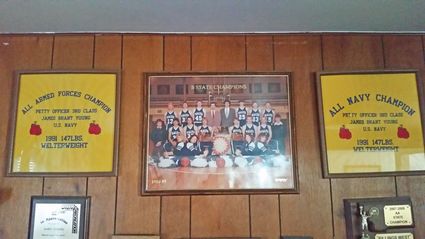 Displayed at his mother and father's house sit many awards won by James Brant Young and his siblings. In this photo are two championship awards that Young had won in 1991. To the left is his All Armed Forces Champion award and to the right is his All Navy Champion award. In the middle is a team photo of the 1985 Malta Mustangs State B Championship team.

James Brant Young made perhaps one of the greatest plays in Malta High School history on Saturday, March 16, 1985, but before and after his game-saving three-point play in that state basketball championship, Young was formidable in the boxing ring.

Born in Havre and raised in Malta, Young is the son of Gary and Donna Young of Wagner. During his boxing career, he had around 160 fights and 12 losses, according to his memory. His career included All-Navy and All-Forces Championship titles in 1991. Since then he has had 28 surgical procedures.

"I have been very fortunate in my life and very suc...